“The days of routine glucose testing with lancets, test strips and blood are over”—The tagline of FreeStyle Liber Flash.

FreeStyle Liber Flash, also known as Flash Glucose Monitor (FGM) is a way to measure blood sugar levels for both non-diabetic and diabetic people. But one thing that differentiates it from other glucose level monitors is that it checks sugar levels without finger pricks.

Abbott has designed the FreeStyle Libre, and it received FDA approval in 2017. Now, it is available in most countries, including India. In this article, we will explain all about the FreeStyle Liber system.

What is a FreeStyle Liber Flash? 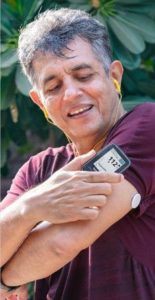 FreeStyle Liber is a type of Continuous Glucose Monitor (CGM) known as Flash in short. It is a small sensor that gets attached underneath your skin, especially on the arm and wrist. Like other CGS, it also measures the glucose level in interstitial fluid (a fluid surrounding your body cells).

As it is attached to your body, it records the sugar level in your body throughout the day and night. Also, it doesn’t require a finger-prick even to calibrate the device, which makes it painless.

There are two types of FreeStyle Liber Flash from which one can choose:

Traditional blood glucose monitors require multiple finger pricks a day. It is a time-consuming, inconvenient, and invasive process. But FreeStyle Liber has solved all these problems.

How does a FreeStyle Liber Flash work?

Besides this, you can also set alarms whenever your sugar level gets too high. However, make sure to activate and set the alarm feature. Also, you have to change a FreeStyle Liber after 14 days for accurate results.

Nothing is perfect! After reading the above-given info, you will probably think FreeStyle Liber is flawless. True, it has many benefits, but it comes with cons too. Let’s take a look at the pros and cons of FreeStyle Liber Flash.

FreeStyle Liber Flash is available in medical stores and online shopping websites such as Amazon. However, it would be best if you had a prescription before buying it.

In India, the prices of FreeStyle Liber ranges from Rs. 5,000-Rs. 15,000. Some expensive ones have test strips known as Precision Neo test strips for finger-prick if required.

What is the Difference between Continuous Glucose Monitor (CGM) and FreeStyle Libre Flash (FGM)?

FreeStyle Libre Flash is a Continuous Glucose Monitor; however, it is different from it. You can place CGM anywhere on your belly or arm, whereas you should only place Libre on your arm. Putting it somewhere else will make the sensor not function correctly.

CGM checks glucose levels continuously, but in FreeStyle Libre, you can check 1440 times a day. Besides this, Libre is more accurate than other CGMs.

While CGMs have a bulky transmitter, FreeStyle Libre Flash does not require one. Hence, it is more movable and convenient.

Who Should Not Use FreeStyle Libre Flash?