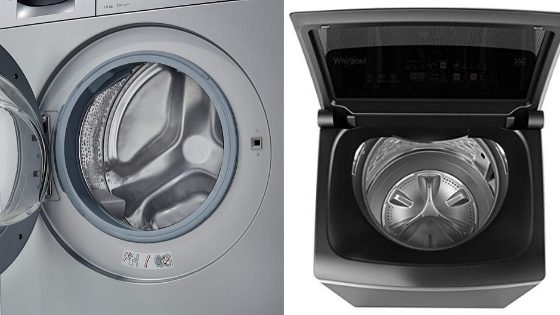 We all have encountered attractive ads for cleaning clothes with a washing machine. Though it may seem in the ad that any washing machine will do the laundry for the family, the main question before making a purchase is what kind of washing machine is better: The traditional top load or the highly efficient front load ones?

In this article, we will be going to pen down some benefits and drawbacks of each type of machine to help you decide which type of electronic gadget is right for your laundry.

The factors that will decide which one is the Best

Selecting the front or top load washing machine can be your own choice. But we think the following factors should be compared in case of each machine type before buying the equipment.

Top-loading machines are more convenient to use since the user does not have to bend while loading and unloading the clothes. In the case of front loaders, it is a bit difficult to add the laundry for washing especially for the aged people since you have to bend while doing it.

You can also add extra clothes in the middle of cleaning or even after the beginning of the cycle in top loaders. Top-loading washers can also distribute fabric softener and collect lint more effectively than the front-loading ones.

Top-loading machines are fitted with an agitator to wash the laundry faster than the front loading machines as the clothes are immersed in water all along the length of the washing cycle. An agitator is a type of mechanism that generates motion by shaking the water forcing through the machine leading to vibration.

Top load washing machines with agitators wash quickly, but those without any agitators clean better clothes all at once using much less water than the other model.

If the machine is overloaded, top-loaded machines can be harsher on clothes. Front-loading machines are much gentler in washing the clothes.

Top loaders also have an immense problem in washing large items like comforters, quilt covers or pillows, since they will not fully immerse inside the water of the machines. This is not a problem in case of front loaders which are top-notch washers, gentler on fabrics with effective stain removal even on large laundries.

Front-loaded machines are more expensive than the top-loaded ones but they offer a more high-quality cleaning service. Front-loaders are also more water and energy-efficient than top-loaded devices.

In addition to the above features, front loaders are also packed with more washing features to accommodate all the soil levels and fabric types. In other words, the price of the front-loaded machines are justified as they include more advanced suspension systems and advanced motors than the top-loaded washers.

Although the upfront cost of the front load machines is higher, in the long run, the expenses will even out due to the use of this device.

Front loading machines use less electricity and water to wash clothes than top-loaded machines. According to the EPA, an average family consumes 300 gallons of water each day. Out of this, 17% of the water is used by the washing machines to clean the clothes. Thus a water-efficient washing machine is much needed to help in environmental sustainability.

Also in some models of front loading washing machines, when it is paired with the dryer, it can wash simultaneously up to 4 loads of laundry to save your valuable time and water.

The front-loading machines can be easily stacked with the dryer. When both are stacked together, the space allotted for laundry is confined to a smaller footprint at home. There are mainly two reasons which indicate why users tend to select more machines that are stacked together with the washer dryer layout. The primary reason is being that most of the homes or laundry sets are located in a small space which is the vertical one. Another reason is that these types of machines allow more functional floor space that can be utilized for additional storage.

In the spinning cycle, front-loaded washing machines spin almost 33% faster than the top-loaded models. This means more water will be extracted from the clothes faster. However the spin cycle also causes a little vibration and noise that people would rather avoid if they want a peaceful laundry.

One of the biggest issues of the users of front-loaded machines is that there is a development of mold from time to time around the rubber gasket of the door. Due to this, the front loading washing machine needs higher maintenance than the top-loaded ones. Top loading machines do not have this issue since gravity pulls the water down so that it does not get trapped inside the seals.

Summary of the Comparison

Now that we are at the end of this article, we would suggest choosing the front or top loaded machines depending totally on your requirements. Shopping for the machines ultimately narrows down to what you are searching for and where the laundry set will be located. Thus choose your device wisely after comparing the above features!